Valencia is the third largest city in Spain.  It is about an hour and a half train ride from Barcelona and I heard it had a nice beach.  What I didn't realize was how amazing the modern architecture is.  The boys and I spent a couple of days exploring the many public gardens, parks and buildings.  We had a great time at the beach which was populated with more locals, than tourists.  Several people struck up conversations with me and the monkeys and it was an overall friendly and nice place to visit. 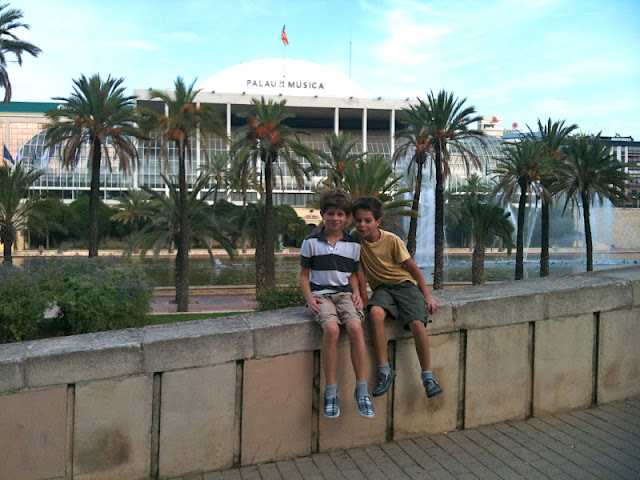 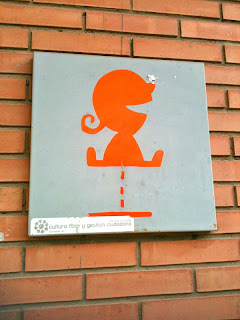 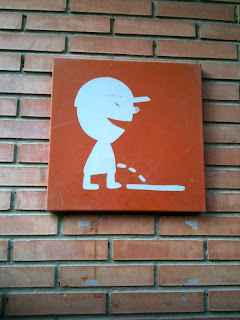 Parc Gulliver, based on the story of Gulliver's Travels was one of the coolest playgrounds I've ever seen.  The enormous replica of Gulliver laying on the ground was connected with seemingly hundreds of slides.  The signs for the bathrooms above made us laugh. 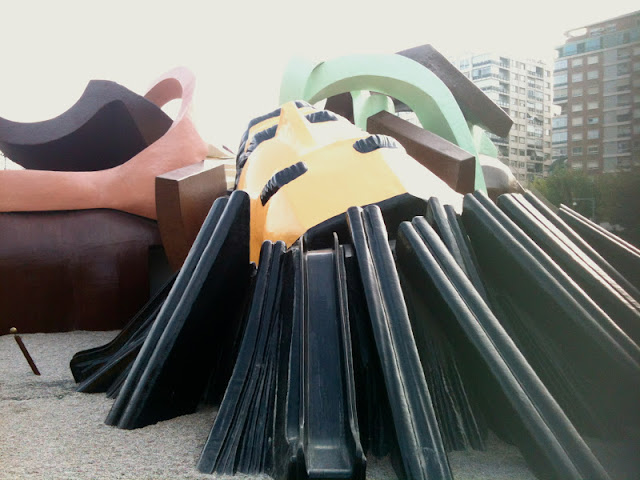 See how his hair is slides 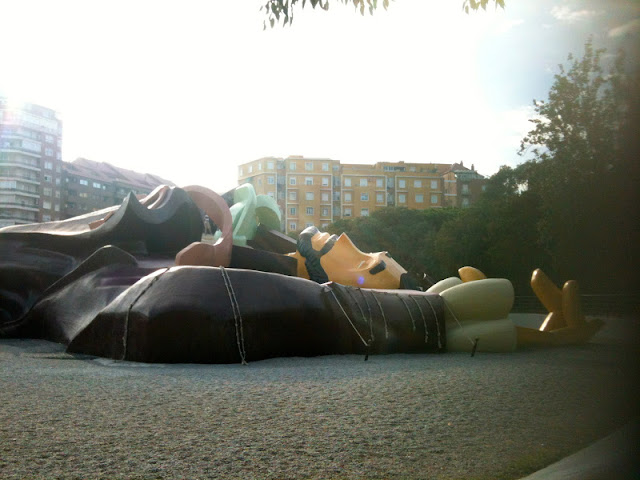 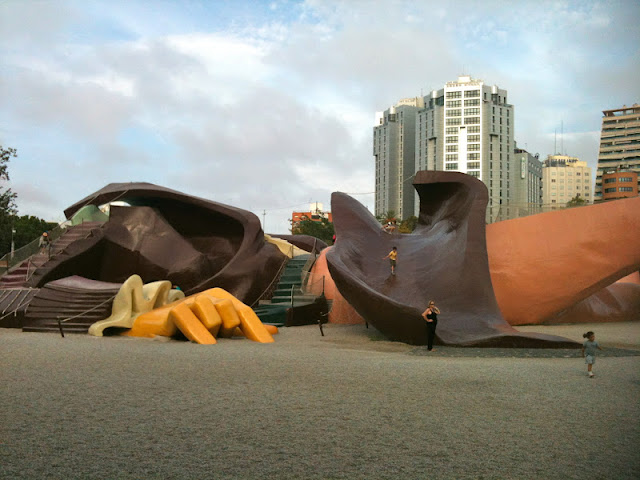 The large slide that was part of his shirt was a favorite place for my monkeys to practice 'snowboarding' you can see that guy in yellow is mine. 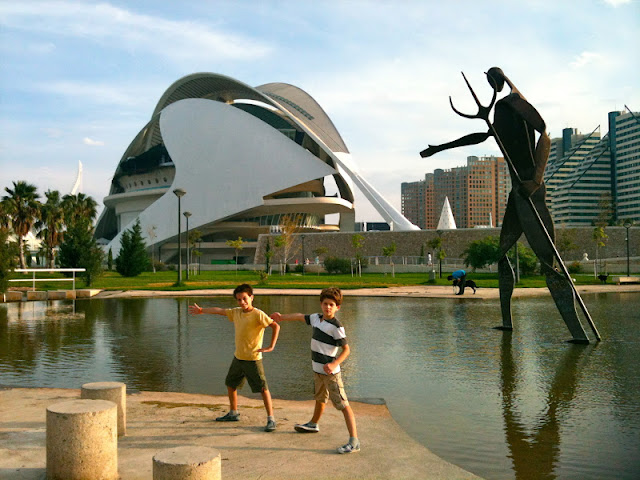 In the arts center there were several buildings including a botanical garden, aquarium, performing arts and music center.  Each was unique, yet they all complimented each other, connecting among beautiful gardens, fountains, grass and reflecting pools. 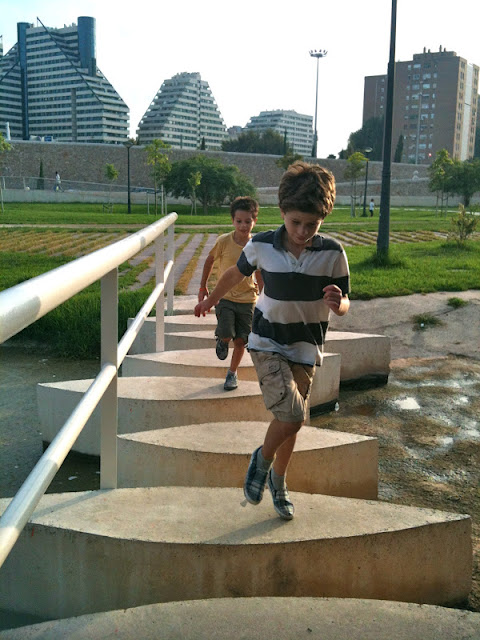 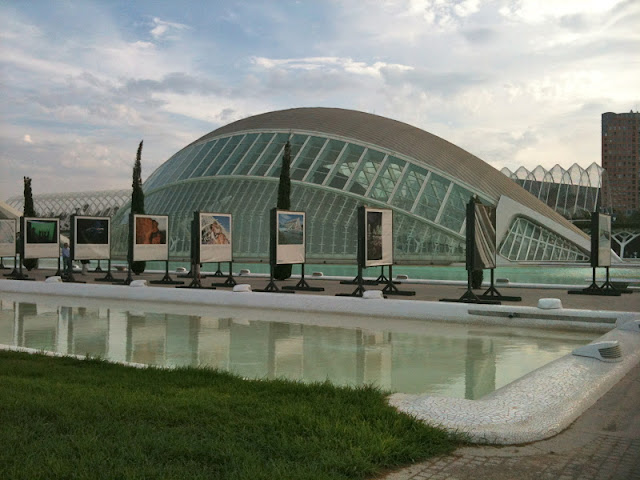 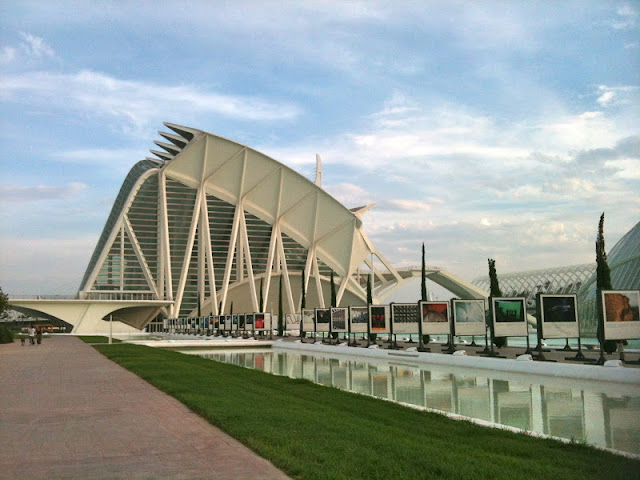 The beach was a highlight.  For starters it was awesome to swim in the Mediterranean Sea (the boys did go into the water in Barcelona but it was so crowded it wasn't relaxing.) This beach was beautiful, well maintained and the weather was perfect. 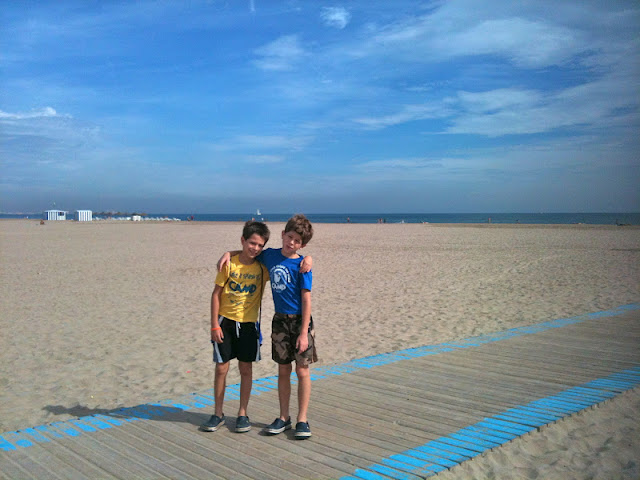 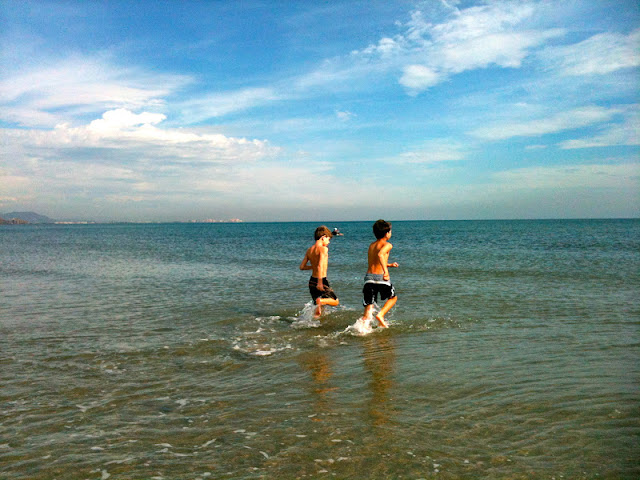 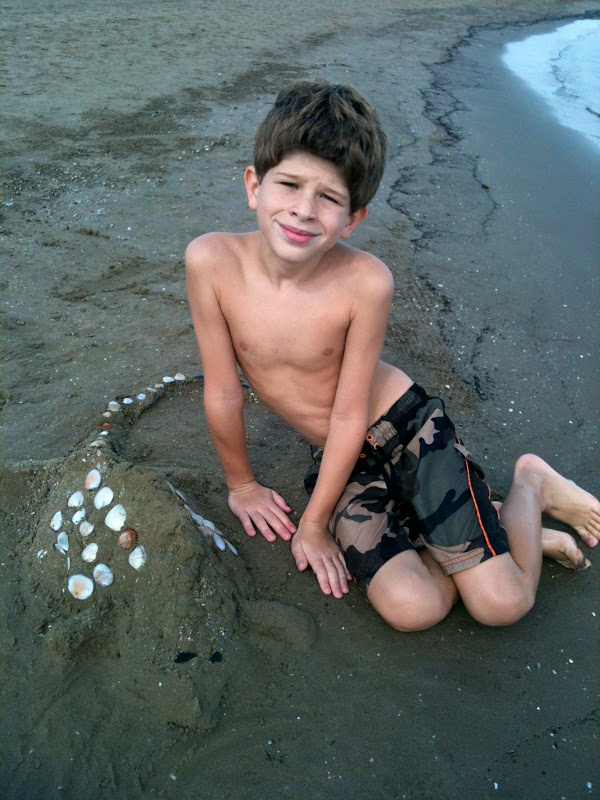 Here Monkey 2 made a replica of the mosaic lizard that he fell in love with in Parc Guell.  He took home a souvenir of the lizard. 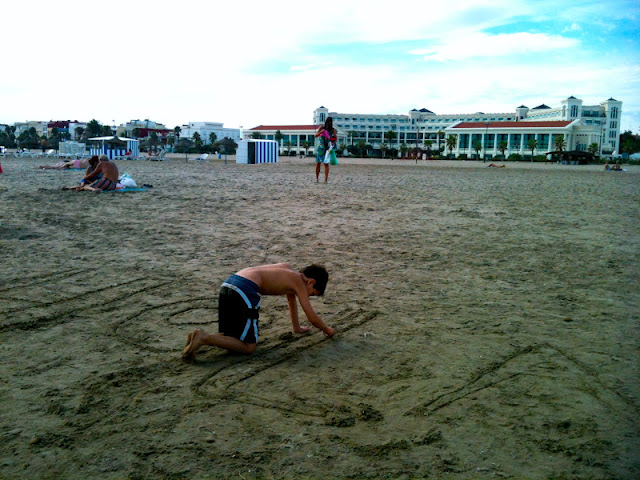 Does this count as a Spanish lesson? Monkey 1 writing in the sand. 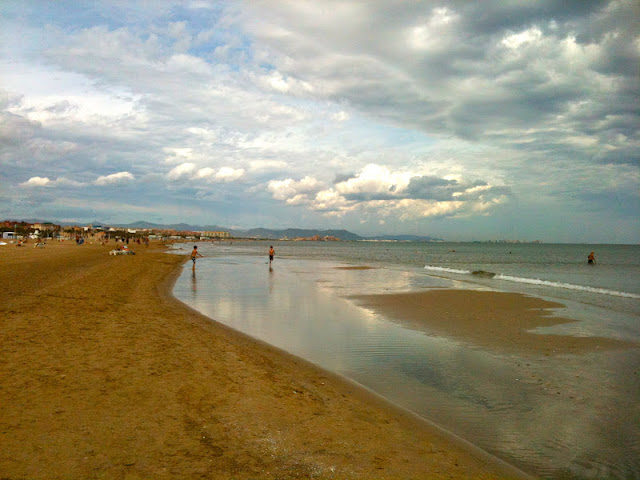 There were some unfortunate fish stuck in this tide pool. 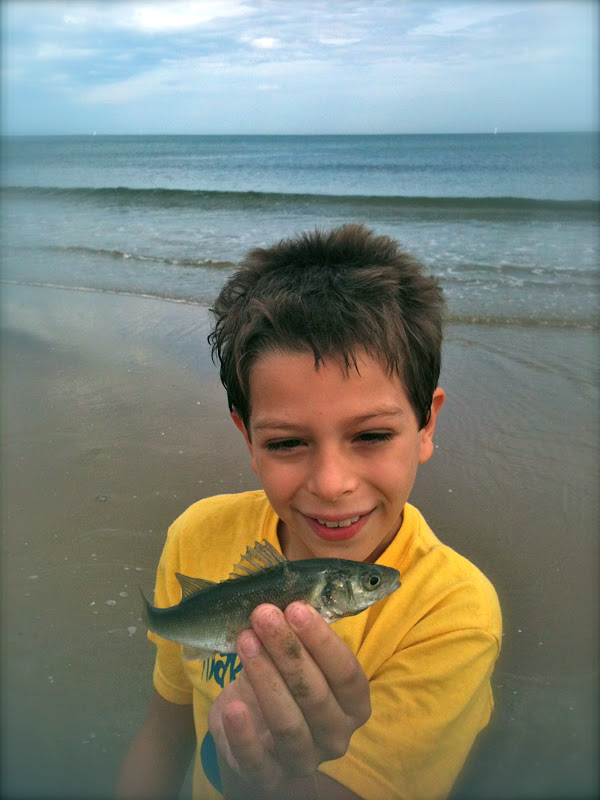 Some of them were caught and saved. 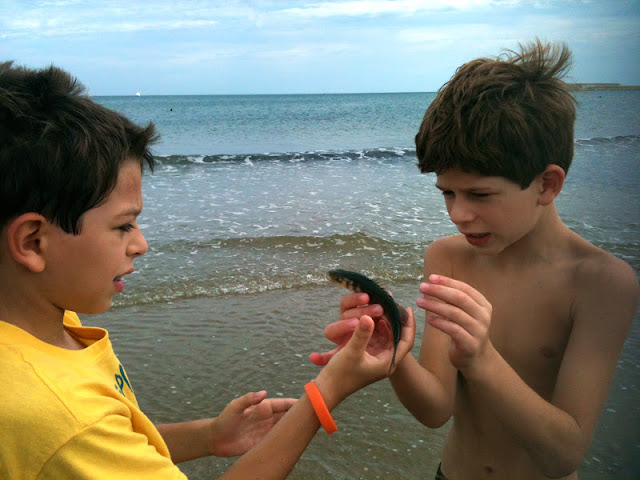 We didn't see any flamenco dancing but it is popular in the southern regions of Spain. 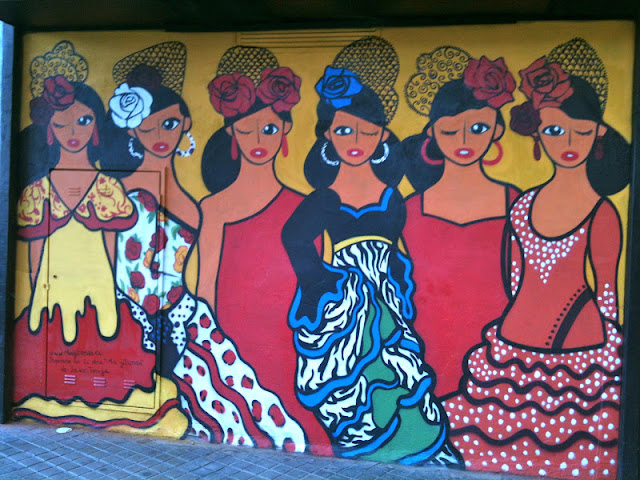 Valencia is the type of city I would love to rent a little flat by the beach for a summer.  Very chill vibe.
Posted by Ren- Lady Of The Arts

I think that I would love that playground. Thanks for sharing!

oh man your kiddos are adorable, you got some great shots of them!

You always seek out ART wherever you are. Wonderful playground and cute washroom signs.

Fantastic pictures! What an amazing playground and those bathroom pictures cracked me up too :) Glad you were able to save those fish!

We are going to Barcelona for our honeymoon so this post made me excited about Spain :)

And yes, I'm totally stalking you on Instagram lol

What an amazing playground! I think it would've taken all my self restraint to keep myself from running up there to play also... ♥

Hey there!
I haven't seen anything from you in a long time, so I'm checking in. Hope everything is okay.