I could never get the story straight, in Spain, about how many little/light meals was typical in the course of a day. Some people eat four small meals, others ate the largest meal around noon. By North American standards nothing would be considered 'light'.
Opinions seemed to vary from region to region but one thing that all Spaniards have in common was that they ate, the last meal of the day, late.

Typical in most of Spain is Tapas. In the northern Basque country these sample plates are called pintox and are served on bread. In either case the sentiment is the same. Usually accompanying a beer or glass of wine small portions of various dishes are served. These range from seafood, fried foods, smoked meats, olives and other pickled vegetables. Sandwiches are pre-made with a splash of meat, cheese or Spanish tortilla and can be purchased at any restaurant, food market or coffee shop.

While in Madrid, I had the good fortune to meet and learn from a lovely Spanish woman. An archeologist and fifth generation Spanish, B., was eager to teach me how to make tortilla de patatas or tortilla española. As her family originally hails from the southern part of Spain I would imagine that the method she uses is common in that region. B. did explain to me that no two people make the same tortilla and that every tortilla is different.

There are five ingredients that go into making a traditional potato Tortilla which is common in all regions of Spain:
Potatoes, eggs, onion, oil and salt.
Apparently tortillas are best when they are eaten the day after. They are served both cold and hot, first meal of the day or last meal of the day and can be served as a main, side or sandwich filling. I believe I covered all of these options while in Spain. This Tortilla that B taught me how to make was amazing and we ate it soon after it came off the pan.

Step One:
Potatoes are peeled (in this case using a small paring knife) and sliced in halves then cut into two millimeter thick half circles
These are then tossed into a bowl with a diced onion

Step Two:
The most insane amount of oil, about half way up the pan, is poured into a skillet and heated.
Potato/onion are added into the hot oil and using a wooden spatula are mixed. As the potatoes become softer they are broken up using the spatula. (About 15-20 minutes) To my great relief the majority of the oil is then set aside and strained for further use in other dishes.

Step Three:
Once they are cooked through and begin to mush add them to a bowl of mixed (not beaten) eggs. At this point more eggs can be added, the mixture should show liquid around the mush.

Step Four:
Add mixture to a hot smaller skillet with a small amount of oil and cook until the eggs have set and the tortilla looks like it could withstand a flipping. B used a plate to transfer her tortilla flawlessly to the other side cooking it on each side for a few minutes. The key to a great tortilla is that the middle is still moist. 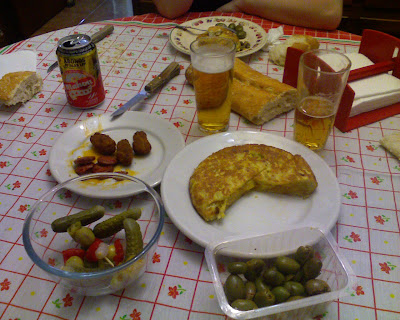 Here is a picture of the final result. True to local custom, we did not eat this meal until well past 9pm and it was eaten with bread, olives, pickles, hot peppers, and onions. As well as some fried chorizo (Spanish sausage) and croquetas (a small potato/meat filled roll that is breaded and fried). Of course we had to wash it down (or drown it) with some Mahou the best beer in Spain.


So I just made my own Tortilla using the steps above. Here are some photos in various stages: 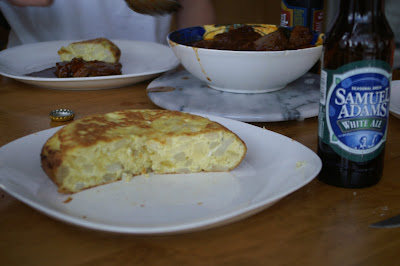 The final result which Sir S said was the best meal I've ever made- Served with the best American beer.
Posted by Ren- Lady Of The Arts No comments: