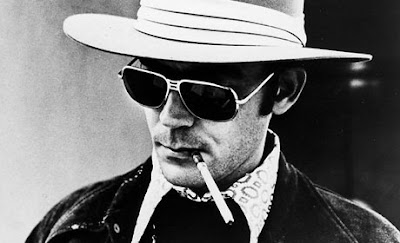 Hunter S Thompson died about five years ago from a self inflicted gunshot wound at the age of 67.
In his suicide note he wrote:

Mr. Thompson is best know for his novel Fear and Loathing in Las Vegas.  Written in first person narrative- it's a story about a journalist, Raoul Duke, who goes on a trip to Las Vegas with his attorney Dr. Gonzo- to report on a race.


Things get exciting largely due to the:
two bags of grass, seventy-five pellets of mescaline, five sheets of high-powered blotter acid, a salt shaker half full of cocaine, and a whole galaxy of multi-colored uppers, downers, screamers, laughers [...] and also a quart of tequila, a quart of rum, a case of Budweiser, a pint of raw ether, and two dozen amyls- they pack and consume in Vegas.
It is not a druggie novel- It is a story about the search for the American Dream.

The film came out in 1998 and stars Johnny Depp as Raoul Duke and Benicio del Toro as Dr. Gonzo. Apparently Johnny lived with Hunter for several months in order to study his character. They became close friends and it is reported that Johnny paid for Hunter’s funeral-which included constructing a 15 story tower modeled after Thompson's logo: a clenched fist, made symmetrical with two thumbs, rising from the hilt of a dagger and a canon on top of it- which then shot Hunter’s ashes into the sky- amid red, white, blue and green fireworks.

Another one of Hunter’s novels- The Rum Diary- is currently in production and scheduled to be release in 2011 - it also stars Johnny Depp as the main character, Paul Kemp. The story, which takes place in the 1950’s- is about a journalist who travels to Puerto Rico to work for a newspaper. Hunter was 22 when he wrote it based on his experience of working for a failed English newspaper in Puerto Rico during the 1960’s. 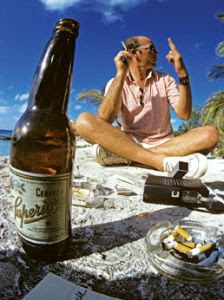 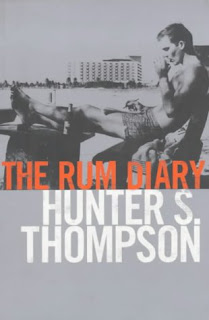 To learn more about Hunter and his work I would strongly suggest seeing Buy The Ticket Take The Ride- a short 70 minute documentary which gives a crash course into the man, the myth and mayhem.
It also delves into Hunter's invention of Gonzo Journalism- a form of subjective reporting which involves injecting oneself into the action of the story being reported on.
Furthermore- If you have not already read The Rum Diary then you should consider doing so before the film comes out. 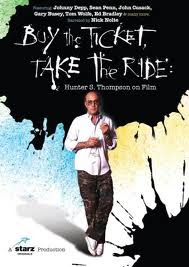 I never read that suicide note before, how dark and sad.
I do like his work though.

I can't say I've ever liked or disliked him before but now I am intrigued and interested to find out more. An interesting, and of course quite sad, suicide note. I must rewatch fear and loathing now.

AWESOME post friend!!
I remember reading my first H.S. Thompson novel in college, of course. That is probably where everyone read their first novel b y him too! His suicide note makes me sad though. I never knew that part. So many creative genuis's are troubled.

So tragic~ such a wounded soul.
Shall check it out...hope I won't get depressed though*

Oh, I absolutely loved reading Fear and Loathing. I was nearing the end of grad school and felt so spent, wondering whether I could pull it out of me & cross the finish line. Something about the novel spoke to me and spurred me on. (Loved the movie too, mainly b/c the leading men seemed to throw themselves into it so - especially Benicio del Toro!) The Rum Diary is on my reading list :)

Wow I've never read that note before either.... So dark, so sad. It always makes me wonder how people get past the point of depression and become accepting of the fact that they're time is done... I don't think that's for anyone to decide really... but still so so very sad. I think his work was brilliant and that doco sounds absolutely intriguing!

I love Hunter S. Thompson. I'm also a fan of Oscar Zeta Acosta, the man Dr. Gonzo was based on.

Acosta's book _Autobiography of a Brown Buffalo_ is a good read if you're into fast, WTF, drug-induced story telling.

I've never read any of his works but you've so intirgues me to find them and get reading! Seems so interesting!

Thank you so much for this post! :) I saw the movie: Fear and Loathing in Las Vegas but I didn't know anything about the book and the author... Thanks to you I have enormous willingness to read The Rum Diary:) xoxo

I love Hunter and enjoyed the film Buy the Ticket Take the Ride. He is a strange one and I am excited to see Rum Diary next year!

and flowers pick themselves said...

I adore Hunter too! Such a tragic way to go. The man was right with his words. There will never be another. I love F&LINL and was happily surprised that the movie was pretty close to the book. Now I want to watch it again. ANd Rum Diary, will be on the lookout. Thanks!

I found this post very interesting - not an author I am familiar with, although I had heard of the fear and loathing film. Still, that is why I love your blog - always learning things i would never come across otherwise. xx

Oh wow! I had not heard of him until now. What an interesting note. It makes you think And not in a very good way.

p.s. be sure to check out my Cupcake Kit giveaway when you get the chance!

The documentary looks like a good one. Will be checking it out. I love this blog!

I had not heard about the funeral part so that was interesting. I love HST and am excited to see The Rum Diary! I read it awhile back!

Truely awesome post. I do adore his work and his suicide note seems sad. Thanks so much for sharing and that documentary looks really interesting! Have a lovely merry happy weekend and love to you!

What a fanatastic suicide note
( If something like that can be fantasitic) Wish i could buy that documentary but you have another DVD system.
Working on the pictures, hope to send them tomorrow ( for sure :))

so, I haven't seen any of these...I feel like I have missed out now! And thanks for checking out my t-giving interview ;) my grandma usually makes ham and turkey actually!

I went through a Hunter phase once. Maybe I'll get back into it!

He's intriguing, but I find his work painful to read-especially on the train at 7:15 headed to work!

never read his books....but after reading ur intresting post i'll surely read some of his works....
all ur posts (always always) are so different and unique....how do find such intresting topics,places,artists........u find them or they find you?
have an intresting weekend!

i've never read his books nor have i seen "fear and loathing..." [which is odd b/c i love johnny depp and benicio del toro], but you have definitely sparked my interest! putting rum diaries on hold at the library! thanks!

A fan also Ren, and you had me cracking up at the thought of following him on twitter! Can't wait for the new film to be released or wrapped up or whatever it is they call it too!

We love Hunter S Thompson in our house. We have a Fear and Loathing poster on our living room wall. Didn't know about The Rum Diary being in production though, very exciting news. If anyone hasn't seen Fear and Loathing, you must. It's awesome xx

Love him. Didn't know about the documentary - will have to check out. was so worried I wouldn't like fear and loathing the movie, but you make me want to give it a try.

I'm happy to report that I read his books as they were released. Fear and loathing was an amazing book. I thought the movie was pretty darn good also.

The merry-go-round bar in the circus-circus scene was hilarious and scary.

Never paid attention to this work before. Thanks lady :) Will now look into it.